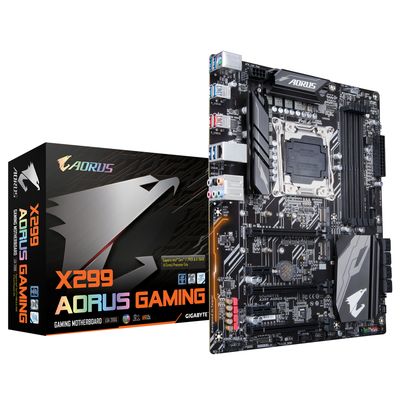 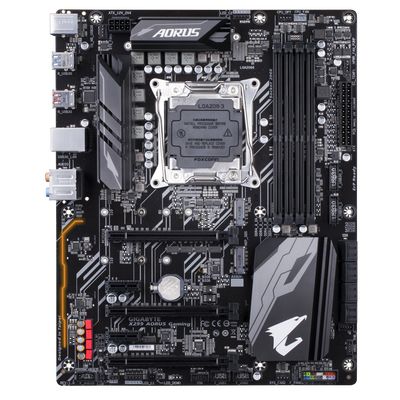 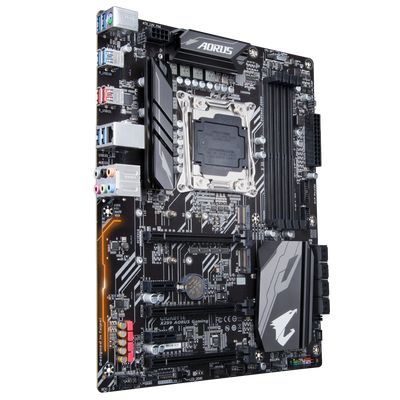 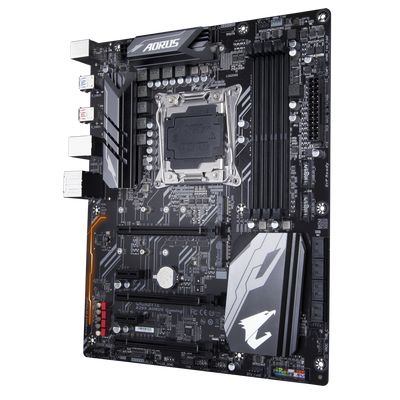 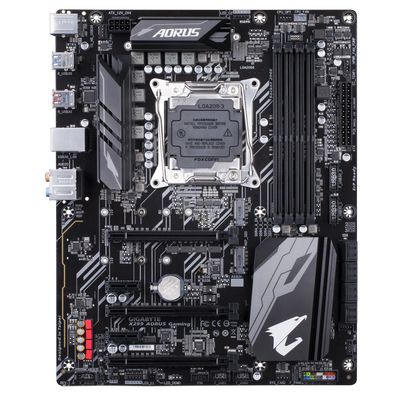 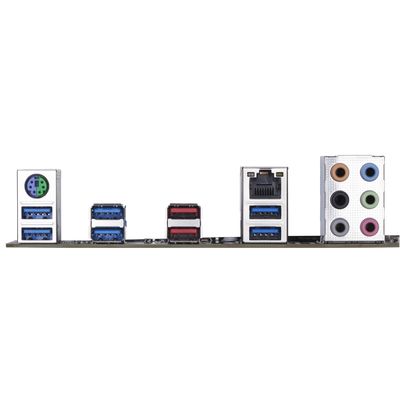 The AORUS X299 enthusiast motherboards are faster and more powerful than any motherboard the world has ever seen. With an aggressively redesigned armor and thermal heatsinks its sure to turn heads and catch eyes. Performance is no stranger to AORUS, with exotic cooling and an ability to be tuned to peak performance AORUS motherboards will exceed expectations.

RGB FUSION
Set the Color that Matches Your Style
AORUS' X299 series motherboards boast the most advanced LED system in the market today. With more customizability than ever and a convenient and intuitive UI thanks to the RGB Fusion App, you’ll have a blast making your AORUS your own. LED enthusiasts now have even more options with the ability to customize multiple zones independently. For a more functional use, the bright and vibrant LEDs can be configured to display the PC’s temperature or load. For even more LED goodness RGBW strips are now supported for more true and vibrant whites.

RGB Fusion (Advanced mode)
With the all new RGB Fusion software, users have access to different preset LED lighting configurations with choice of colors. You can even set the LEDs to synchronize with your favorite music or have them change colors to indicate the CPU temperature. For true lighting experts there is an Advanced Mode, which can be fully customized by individual area with its own effects and color transitions, along with specific duration and transition times.

GIGABYTE RGB Fusion APP
Don't just make your PC shine, make it a work of art that friends will envy. With the GIGABYTE RGB Fusion mobile app users can watch as they control the lighting within their gaming PC. This gives users ease of access as they try and adjust colors and speeds for different modes, all this can be achieved away from the keyboard and monitor of their PC.

Supports RGBW & - UV Light Strips
Independently Programmable Onboard Pin Header for RGBW/-UV LED Strips
Not bright enough? You can install standard 12V external RGB, RGBW or RGB/UV light strips on the RGBW pin header and control its color from the RGB Fusion software. Using a RGBW light strip with a dedicated white LED, users will experience brighter and more vibrant shades of colors.
When using RGB/UV LED strips, users can give their systems a fluorescent glow with the use of UV reactive liquid, neon braided cables, and acrylic paint for a wicked-looking gaming PC.
No need to worry when choosing light strips as AORUS motherboards support a wide variety of RGBW/-UV light strips on the market thanks to the RGB Fusion software that allows users to redefine the pin location for the R/G/B Signal.

Achieve fan silence. With Fan Stop map any fan to stop completely when temperatures drop below a specified threshold. Which fan stops, based on readings from which sensor, and at what temperature—all of it can be customized to your liking.

Hybrid Fan Pin Headers & Temperature Sensors
Assume complete control over your liquid cooling setup! Smart Fan 5 receives up-to-the-second information on flow-rate and water-temperature through the Hybrid Fan Pin Headers or external thermistor sensors—giving you absolute mastery over your PC.
- All Hybrid Fan Headers can automatically detect the type of cooling device whether it be fan or pump with different PWM or Voltage mode.
- Includes support for one High-Current Pump up to 3 Amps with built-in overcurrent protection—a must for high-end high current fans.

New Smart Fan 5 Software
Choose from different modes, Quiet to Full Speed, to match your system usage scenario.
For each fan or pump, you can use the intuitive fan curve to define trigger thresholds and corresponding fan speeds.eds.

Interoperable Sensors and Fans
Each fan can be customized to operate at different speeds according to any defined temperature source input (except the CPU fan).

Immersive VR Gaming Experience
To create a seamless VR experience AORUS Motherboards offer the best features to make your virtual reality feel like your actual reality. With technologies such as NVMe support via M.2 or U.2 and a one piece metal shielding to brace for heavier discrete graphics cards it's obvious that AORUS has the tools you need to start your journey in VR. To set the mood AORUS Motherboards include RGB Fusion to put you in the center of action.

U.2 Adaptor (NVMe PCIe Gen3 x4)
NVMe Performance for PCIe SSDs
The new Intel 750 series SSDs offer an incredible increase in performance over SATA drives. Using the NVMe protocol which takes advantage of the fast bandwidth of PCIe Gen3 x4 lanes (32 Gb/s), the drives are a clear advantage for users looking to boot their OS faster, load their games in a flash and access large files without waiting. By implementing the U.2 Adaptor to support the 2.5” Intel 750 Series drive, AORUS ensures that the users can benefit from the best performance.

Support for DDR4 XMP Up to 4133MHz and Beyond
AORUS is offering a tested and proven platform that ensures proper compatibility with profiles up to 4133MHz and beyond. All users need to do to attain this performance boost is to ensure that their memory module is XMP capable and that the XMP function is activated and enabled on their AORUS motherboard.

What is XMP?
DDR4 memory modules are available at a stock frequency of 2133MHz, but as frequency tweaking requires a considerable amount of effort and knowledge, memory vendors encode XMP profiles which can automatically modify the timings of the supported memory modules to work with your CPU and to achieve increased performance.

Broad DDR4 Compatibility with Support List of 1000+ DDR4 Validated！
AORUS partners very closely with memory vendors from around the world to ensure that modules offered by popular memory brands are compatible with AORUS Motherboards. AORUS has verified over 1000+ different modules to ensure performance in a AORUS built system.

Refreshed BIOS Easy, Smart, and Friendly
The BIOS is essential for users during initial setup to allow for the most optimal settings. With a new GUI and easier to use functionalities, GIGABYTE has been able to reinvent the BIOS to give users a better experience while setting up their new system.

EasyTune
GIGABYTE's EasyTune is a simple and easy-to-use interface that allows users to fine-tune their system settings or adjust system and memory clocks and voltages in a Windows environment. With Smart Quick Boost, one click is all it takes to automatically overclock your system, giving an added performance boost when you need it the most.

Overclocking to Boost Your Frame Rates
Get the highest levels of performance from your PC with easy-to-use GIGABYTE overclocking features.

PURE SPEED
AORUS Extreme USB 3.1 Motherboards
The ASMEDIA 3142 USB 3.1 controller utilizes 2 PCIe Gen3 lanes, offering a total of up to 16 Gb/s, which means you have extra bandwidth to take full control of the 10 Gb/s USB 3.1 ports. With twice the bandwidth compared to its previous generation, and backwards compatibility with USB 2.0 and 3.0, the much improved USB 3.1 protocol USB Type-A connector for better compatibility over a wider range of devices.

START SULFURIZATION PROTECTION
Sulfur compounds in the air can penetrate tiny onboard resistors creating chemical change and causing these resistors to open or short. If either of these occurs the motherboard will fail to function. By equipping resistors with an Anti-Sulfur Design GIGABYTE gives Ultra Durable Motherboards a whole new meaning.

GIGABYTE Patented DualBIOS Design
GIGABYTE Ultra Durable motherboards feature GIGABYTE DualBIOS, an exclusive technology from GIGABYTE that protects arguably one of your PC's most crucial components, the BIOS. GIGABYTE DualBIOS means that your motherboard has both a 'Main BIOS' and a 'Backup BIOS', protecting users from BIOS failure due to virus, hardware malfunction, improper OC settings or power failure during the update process.

@BIOS
The GIGABYTE @BIOS app allows you to update your system’s BIOS from within Windows using a simple and slick graphical user interface. @BIOS can automatically download the latest version from the GIGABYTE servers or you can update your BIOS from a file on your computer. @BIOS also allows you to save your current BIOS to a file, recover your previous BIOS from an image and backup your BIOS to an image.

Easy to Install "G Connector" Design
The tiny cables of the front panel connectors can be hard to manipulate as space is restricted and indicators being tiny. With the G Connector, you can connect all the FP cables at once, simplifying the process of building your next PC and saving you some frustrations.

TriDef SmartCam | Custom Stream Modding
To facilitate being the full streaming solution each AORUS motherboard includes TriDef SmartCam software, you are now able to remove backgrounds without the hassle of using a green screen. Through the SmartCam application you can now apply live filters, and fully control your background, not only while streaming, but also through other video applications such as Skype.

Largeur:
305 mm
Profondeur:
244 mm
Automated video search by product name (the results maybe not the some as product in our store).